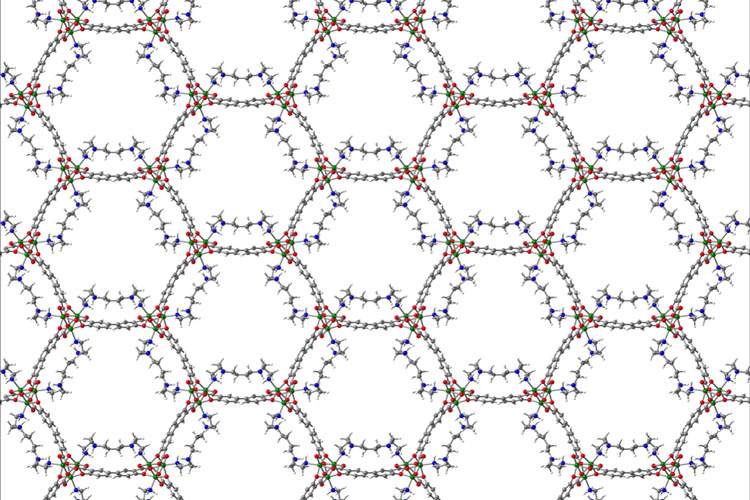 Carbon dioxide emissions by electricity generating plants, fossil-fuel burning vehicles, and industry produce about 2/3 of the greenhouse gases driving climate change.  Without decreasing these emissions, the earth will continue to get warmer, sea levels will continue to rise, and the world will face more droughts, floods, wildfires, famine and conflict.

Electrification of vehicles and reliance upon renewable energy sources will ultimately drastically reduce the use of fossil fuels and the resultant emissions, but that transition may take too long to reverse the direction of climate change.  In the meantime, there is a great need to find effective and efficient ways to capture emissions from fossil fuel plants.

Recent research at the University of California, Berkeley, Lawrence Berkeley National Laboratory, and ExxonMobil has developed a new technique for carbon capture.  The technique makes use of metal-organic framework (or MOF) technology.  An MOF, modified with nitrogen-containing amine molecules, captures CO2 and then low-temperature steam is used to flush out the CO2 either to be used or sequestered underground.

Experiments demonstrated the technique to have a six-times greater capacity for removing CO2 from the flue gas of a refinery than current amine-based technology.  It selectively removed 90% of the emitted CO2.

There is a relatively limited market for captured CO2, so power plants using the capture technology would likely pump the CO2 into the ground, or otherwise sequester it.  The cost of doing this sort of emission scrubbing would have to be facilitated by government policies, such as carbon trading or a carbon tax, which would provide the necessary economic incentive for doing carbon capture and sequestration.