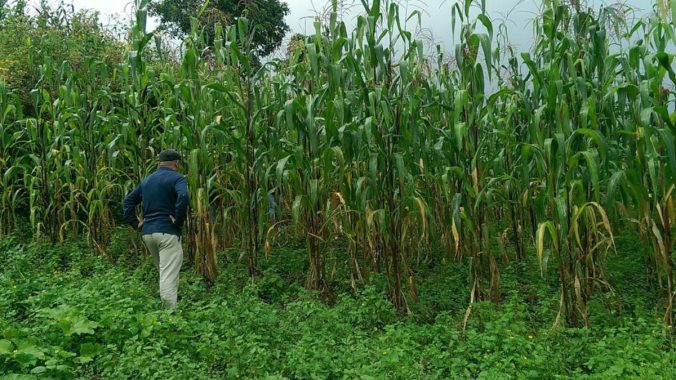 In 1979, an American naturalist named Thomas Hallberg visiting a small town in Oaxaca, Mexico was amazed to find a type of local maize – or corn – that grew nearly 20 feet high in poor-quality soil even though the local farmers did not use any fertilizer.

The unique corn plant had aerial roots that grew a mucous-like gel just before harvest season.  It seemed totally implausible, but the plant seemed to be fixing its own nitrogen:  extracting it from the air and somehow making it useful to the plant.

In 1992, Hallberg returned with a group of Mexican scientists and collected samples to study in his lab.  His research showed that the maize indeed received nitrogen from the air through its aerial roots.  It took over 20 years to figure out what was going on in the plants.  It turns out that bacteria that thrive in the low-oxygen environment of the maize’s mucus pulls nitrogen from the air and feeds it to the plant.

Scientists will probably spend years figuring out if a commercial application of this indigenous maize is viable.  It isn’t guaranteed that the self-fertilizing trait of the plant can be bred into a commercial crop.  But if it can, the payoff would be huge.  Farmers spend more than $3 billion a year on corn fertilizer in the US alone.

A vexing problem is who should reap the financial benefits of the maize.  The isolated village where the plant is grown has already signed an agreement to share in any such benefits.   But there are other Oaxacan villages that also grow the plant.

Mexico’s wonder plant is likely to be caught up in the growing issue of biopiracy, which is the exploitation of indigenous knowledge and biological resources without permission.

Indigenous Maize: Who Owns the Rights to Mexico’s ‘Wonder’ Plant?