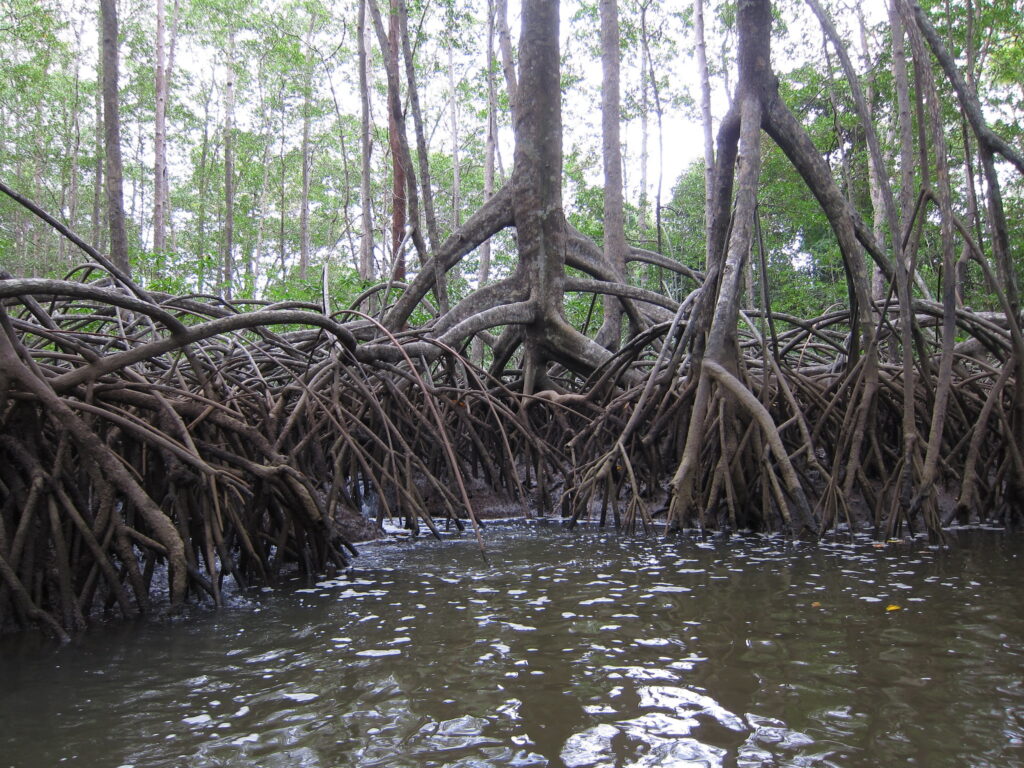 Mangrove trees are small trees that grow in coastal saline or brackish water at tropical and subtropical latitudes.  Many mangrove trees can be identified by their dense tangle of prop roots.  These roots make the trees appear as if they are standing on stilts above the water.  The tangle of roots allows mangrove trees to handle the daily rise and fall of tides and to slow the movement of tidal waters.

Mangrove forests provide many ecosystem services, including stabilizing the coastline by reducing erosion from storm surges, waves, and tides.  The intricate root system of mangrove trees are attractive to fish and other species seeking food and shelter from predators.  Mangrove forests also store large amounts of carbon.

But according to a new study recently published in the journal Science, mangrove trees won’t survive sea level rise by 2050 if greenhouse gas emissions aren’t reduced.

Using sediment data from 78 locations over the last 10,000 years, an international team of scientists led by Macquarie University in Australia estimated the chances of mangrove trees survival based on the projected rates of future sea-level rise.

When sea level rise rates exceeded 6 millimeters per year, which is similar to estimates under high-emissions scenarios for 2050, researchers found that mangrove trees were unlikely to keep pace with the rising water levels.  But when the annual increase was 5 millimeters or less – which is the projected low-emissions scenario this century – mangrove trees are much more likely to survive.

These findings underscore the importance of reducing greenhouse gas emissions to mitigate rapid sea level rise.  The future of mangrove trees may depend on it.