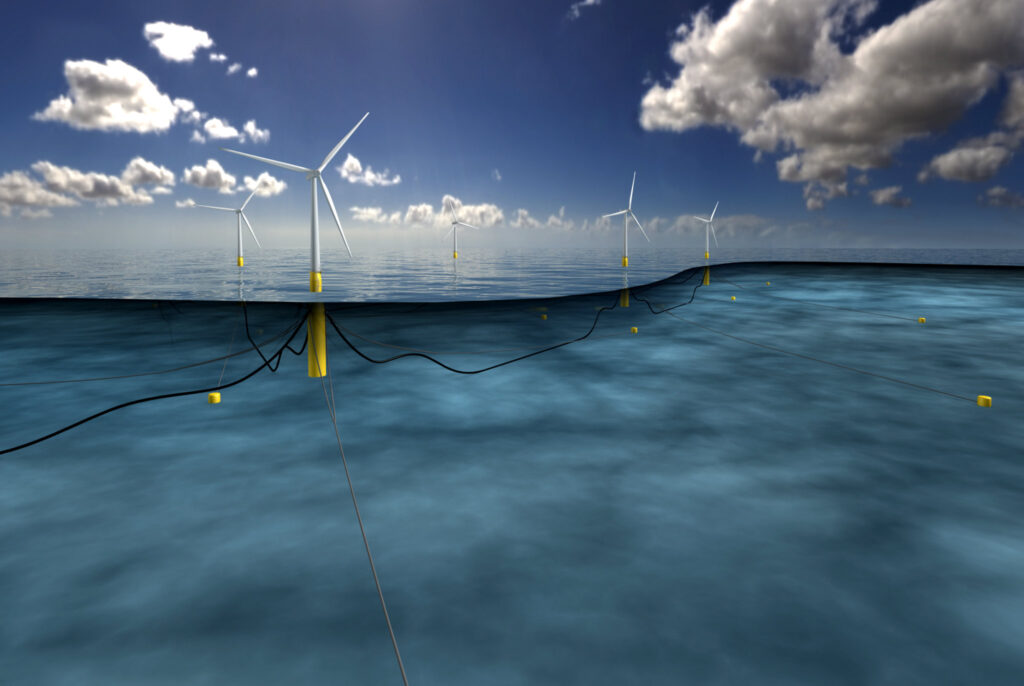 Offshore wind is big in Europe.  There are more than 5,000 offshore wind turbines across 12 European countries with a total capacity of more than 22 gigawatts.  Almost every one of those turbines sits on a long tower sunk into the seabed and bolted into place in places where the water is 60 to 160 feet deep.

But off the coast of northern Scotland, there is the Hywind Wind Park which has five 574-foot-tall turbines located 15 miles offshore where the water is 300 feet deep.  The giant masts and turbines sit on buoyant concrete-and-steel keels that allow them to stand upright and float on the water like a giant buoy.  The giant cylindrical bases are held in place with mooring cables attached to anchors that sit on the seafloor.

A key advantage of floating turbines is that they can access outlying ocean waters up to half a mile deep, which is where the world’s strongest and most consistent winds blow.  Another advantage is that such turbines can be installed over the horizon, out of sight of coastal residents who might not like to have wind turbines visible in their scenic ocean views.

Floating wind power has enormous potential for contributing to the expansion of renewable energy.  Offshore wind is still quite a bit more expensive than land-based turbines, and the cost of electricity from distant floating turbines is more than that from near-shore wind turbines.   But all of these costs are likely to come down with improving technology and increased production volume.

There are real challenges to the expanded used of floating wind farms, but the promise of harnessing so much of the open seas for electricity generation is an attractive proposition.

Will Floating Turbines Usher in a New Wave of Offshore Wind?