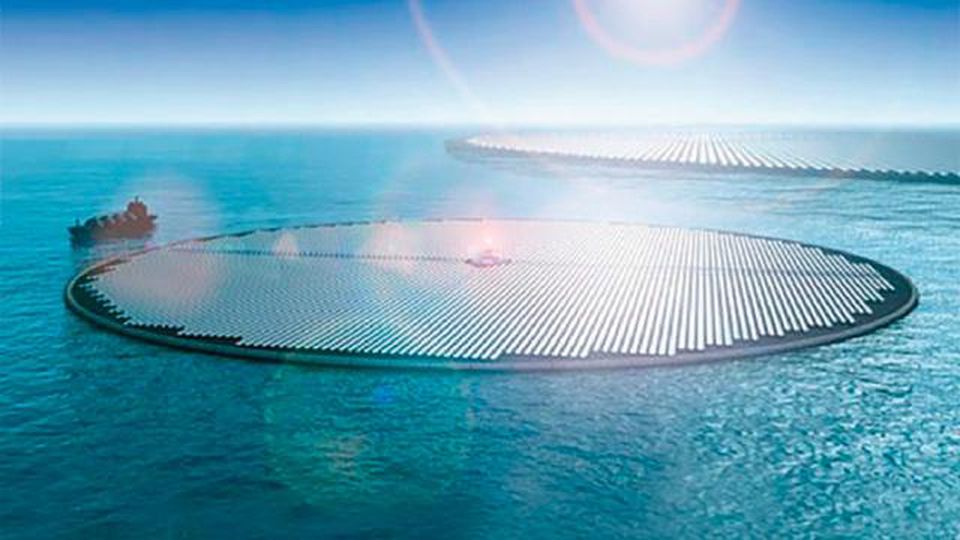 Limiting global warming will require a massive reduction in CO2 emissions from fossil fuel burning.  Renewable energy sources are playing a growing role in the power grid and electric cars are becoming increasingly popular.  Despite all this, carbon-based liquid fuels will continue to dominate our energy use for the foreseeable future.

Researchers in Norway and Switzerland have described a potential scheme that would help remove CO2 from the atmosphere and produce a valuable liquid fuel.

The idea is to create floating islands containing large numbers of solar panels that convert carbon dioxide in seawater into methanol, which can fuel airplanes and trucks.

A combination of largely existing technologies would be the basis of these floating islands, which would be similar to present-day floating fish farms.  The researchers envision clusters each composed of 70 circular solar panels that in total cover an area of roughly half a square mile.  The solar panels would produce electricity, which would split water molecules and isolate hydrogen.  The hydrogen would then react with carbon dioxide pulled from seawater to produce usable methanol.

The technology already exists to build the floating methanol islands on a large scale in areas of the ocean free from large waves and extreme weather.  Suitable locations are off the coasts of South America, North Australia, the Arabian Gulf, and Southeast Asia.

A single floating solar farm could produce more than 15,000 tons of methanol a year – enough to fuel a Boeing 737 airliner for more than 300 round-trip flights across the country.  Floating energy islands would not be a magic bullet for limiting the effects of climate change, but they could well be an important part of an overall strategy.