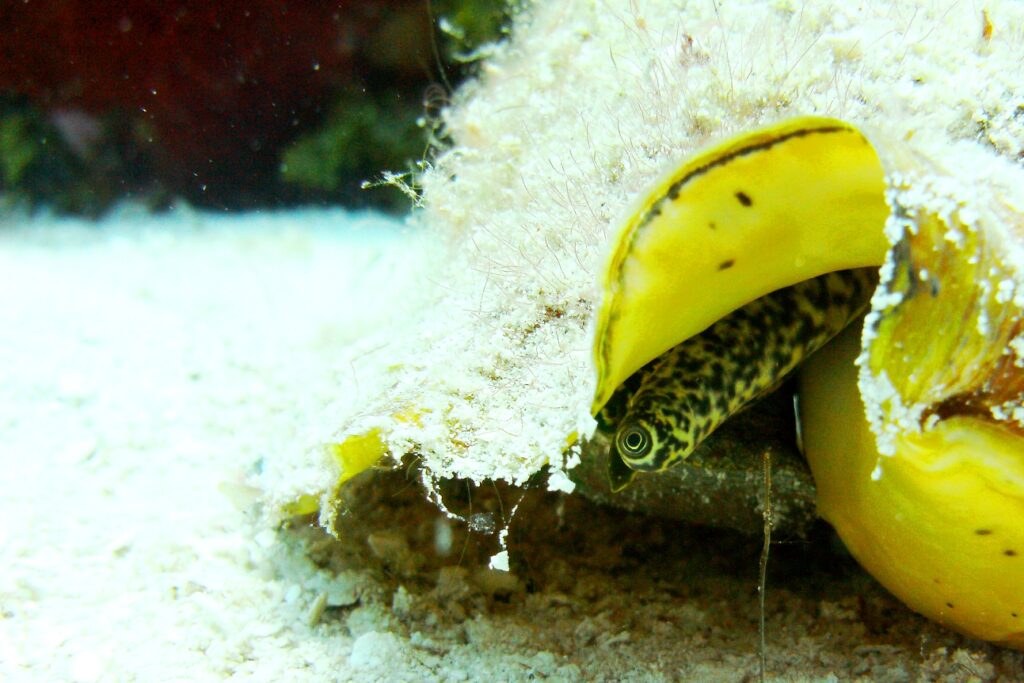 Queen conchs are large sea snails belonging to the same taxonomic group as clams, oysters, and squid.  They live on coral reefs or seagrass meadows in warm, shallow waters.  Queen conchs are found throughout the Caribbean Sea and Gulf of Mexico, ranging as far north as Bermuda and as far south as Brazil.

Reaching up to 12” long and living up to 40 years, the queen conch is prized as a delicacy and revered for its shell.  It’s the second most important sea-bottom fishery in the Caribbean region, trailing only the spiny lobster.

But queen conchs face a challenge.  Their populations are in a steady rate of decline as a result of overfishing, habitat degradation, and hurricane damage.  In some places, the numbers are so low that remaining conchs cannot find breeding partners.  The situation is urgent from both an ecological and economical perspective.

As a result, Megan Davis, a scientist from Florida Atlantic University who spent more than four decades researching queen conch, has released an 80-page, step-by-step user manual about how to care for the species. Her work was recently published in the National Shellfisheries Association’s Journal of Shellfish Research.

According to Davis, aquaculture, along with conservation of breeding populations and fishery management, are ways to help ensure longevity of the queen conch.  With requests for mariculture guidance pouring in from communities throughout the Caribbean, Davis and her collaborators are expanding their queen conch conservation, education, and restorative mariculture program.

‘Hail to the queen’: Saving the Caribbean queen conch