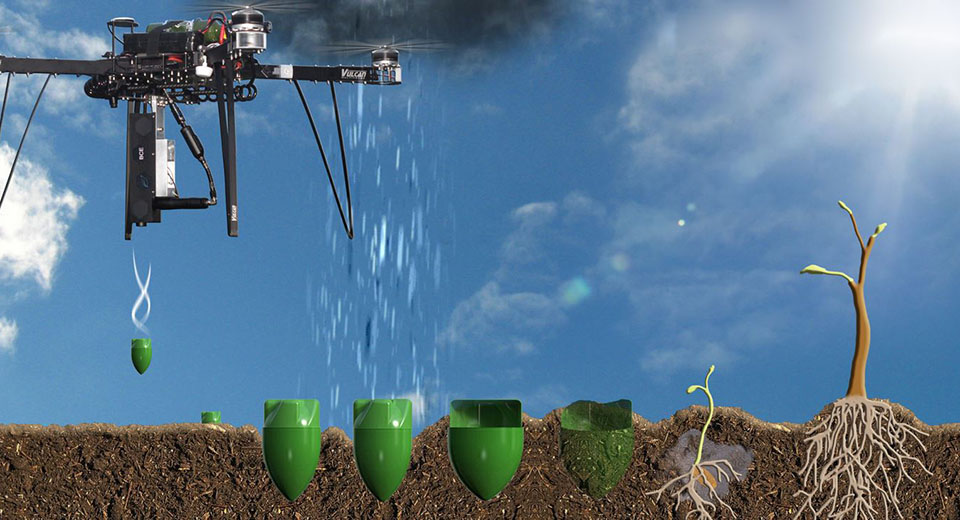 One of the major causes of the increasing carbon dioxide levels in the atmosphere is deforestation.   We chop down about 15 billion trees each year.  Over time, our activities have reduced the number of trees on earth by about 50%.  We do plant trees – these days, about 9 billion a year.  It is a substantial number, but still leaves a net loss of 6 billion trees annually.

Planting trees by hand is slow and expensive work.  While clearing vast areas of land is an industrial-scale activity, restoring forests isn’t.

A British company called BioCarbon Engineering has teamed up with a drone manufacturer named Parrot to create a method of planting trees quickly and cheaply.  Not only is it fast and cheap, it can plant trees in areas that are difficult to access or otherwise unviable.

A drone loaded with germinated seeds fires pods into the ground at a rate of one per second, which corresponds to 100,000 a day.  Sixty drone teams could plant 1 billion trees a year.

BioCarbon’s engineers estimate that their method is about 10 times faster and 1/5th the cost of hand planting.  There is no heavy machinery involved and there is no difficulty in reaching areas that have no roads or steep, inaccessible terrain.

A similar idea is being used by an Oregon start-up company called DroneSeed.  They are using drones to plant trees as well as spray fertilizer and herbicides.

Agriculture is the biggest driver of deforestation, clearing forests to cultivate soy, palm oil, cocoa, as well as for beef farming.  As a result, the world loses an area of forest the size of 48 football fields every minute.  It will take an industrial-sized solution to solve the problem.

‘Tree-Planting Drones’ from Earth Wise is a production of WAMC Northeast Public Radio.