You are here: Home / Podcast / Finding Methane Leaks With Lasers 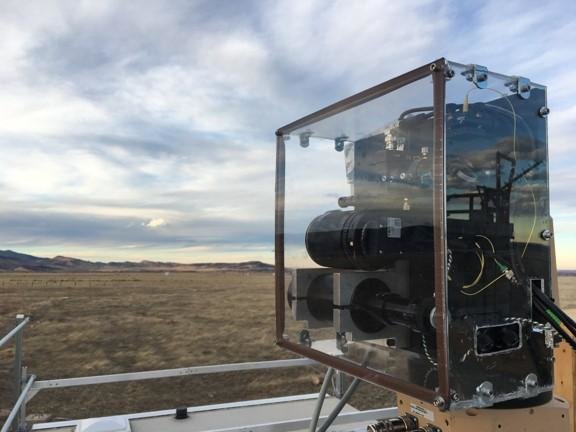 Burning natural gas instead of coal is considered to be an important way to reduce greenhouse gas emissions.  In principle, it is.  Gas combustion produces much less carbon dioxide than coal combustion.

However, there is a problem: methane leakage.  Natural gas is primarily composed of methane and methane is a far more potent greenhouse gas than carbon dioxide – it is 25 times more effective at trapping heat in the atmosphere.

The source of the problem is that the various elements of natural gas extraction, processing and transportation are prone to methane leakage.  Methane leakage costs gas companies money and contributes significantly to climate change.   And finding leaks is difficult, time-consuming, and often doesn’t happen at all when leaks are intermittent in nature.

Researchers at the University of Colorado, the National Institute of Standards and Technology, and NOAA have now demonstrated a new laser-based system that can uniquely detect slow, low-volume methane leaks from as far as a kilometer away.  Even better, the system could in principle operate autonomously.

The system makes us of a technology called frequency comb laser spectroscopy, which in this case uses the specific absorption spectrum of methane as a fingerprint to identify its presence.  The system is so sensitive that it can detect leaks with flow rates equivalent to a quarter of a person’s resting breathing rate.

Finding a way to deal with intermittent methane leakage in natural gas facilities is a crucial need in the effort to reduce greenhouse gas emissions.  According to a number of studies, methane leakage essentially eliminates any advantage burning natural gas has over burning coal with respect to greenhouse gas emissions.  It is a problem that needs to be fixed.

Photo courtesy of Sean Coburn/University of Colorado in Boulder.