You are here: Home / Podcast / Trouble For The Outer Banks | Earth Wise 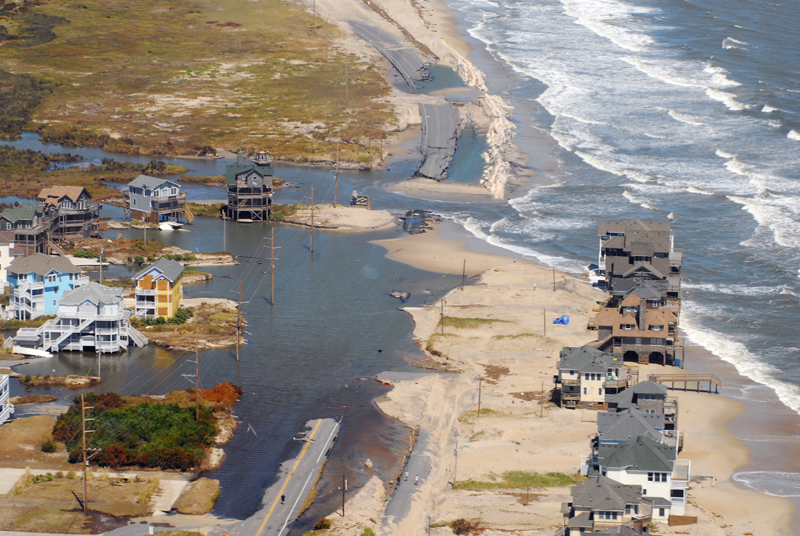 The Outer Banks are a series of barrier islands off the coast of North Carolina that separate the Atlantic Ocean from the mainland.  They are a very popular tourist destination featuring open-sea beaches, state parks, shipwreck diving sites, and historic locations such as Roanoke Island, the site of England’s first settlement in the New World. There is also Kitty Hawk, the site of the Wright Brothers’ first flights.

The ribbon of islands is nearly 200 miles long.  Some of them are low and narrow and are only a few feet above sea level.  Many are especially vulnerable to Nor’easters in the winter and hurricanes in the summer.  The collision of warm Gulf Stream waters and the colder Labrador current helps to create dangerous shoals and some of the largest waves on the East Coast.

Over the years, developers have added billions of dollars’ worth of real estate to the Outer Banks.  Rising sea levels and increasingly frequent storms threaten the barrier islands of the Outer Banks.  Beach-front cottages have tumbled into the ocean for as long as people have built them in the Outer Banks but now they are falling at a greater rate and more and more are in danger.

The Department of Transportation has spent nearly $100 million dollars to keep NC12, the highway connecting the string of islands, open to traffic.  Three new bridges built to traverse inlets opened by storms and bypassing rapidly eroding shorelines raised the cost by another half a billion dollars.

There are many other measures such as pumping sand into eroded areas going on in the Outer Banks, but ultimately, all of the measures may not be enough to deal with rising sea levels and more powerful storms.