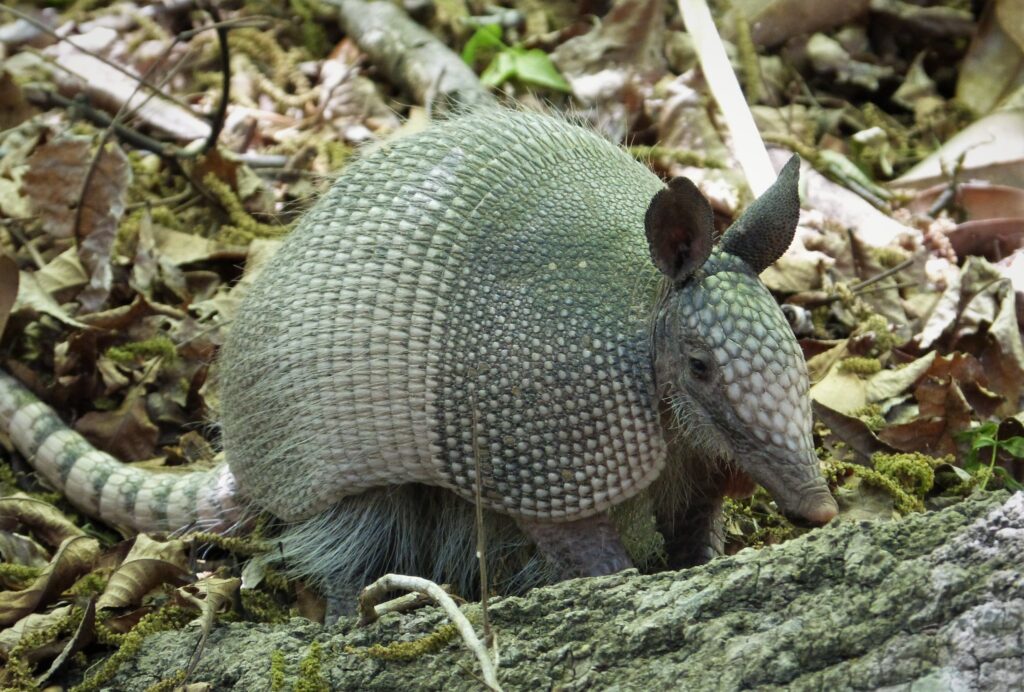 Armadillos are small mammals known for their unique armor-like shell and their digging habits.  There are 21 species, primarily native to South America.  Some species have expanded northward due to their rapid breeding cycle, adaptability, and reduced number of predators.  Only one species – the nine-banded armadillo – is found in the United States.  In fact, it is the official small mammal of the state of Texas.

Over time, armadillos have expanded their range to states in the Deep South.  More recently, the animals have been pushing further north.  Milder winters in the changing climate have allowed them to inhabit new areas, including parts of the Blue Ridge Mountains. They were first sighted in North Carolina in 2007 and their numbers have recently been growing in the western half of the state.

There are now armadillos as far north as Missouri, Nebraska, and Iowa, and there is little to halt their further advance.  They are able to hold their breath for six minutes at a time, so they can cross rivers by walking along the bottom or by inflating their intestines and floating across the top.  Their hard shell provides protection from predators.  They reproduce prolifically.  Females give birth to quadruplets multiple times over the course of their 12-15-year lifespan.

Armadillos are fun to look at, but they are a nuisance where people live.  They are prone to digging holes in lawns.  In parts of North Carolina, some people have placed bounties on the animals.  They are difficult to trap and there aren’t common repellents for them.  As the climate continues to warm, it is only a matter of time before the range of armadillos expands into other states.

Photo, posted May 2, 2017, courtesy of Gail Hampshire via Flickr.