You are here: Home / Podcast / A Plane With No Moving Parts 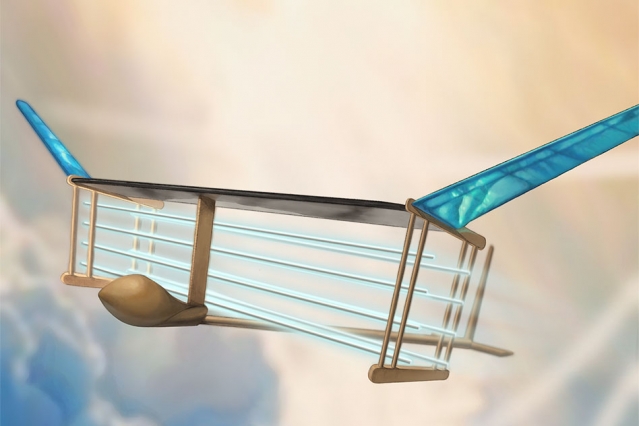 Instead of propellers or turbines, the new plane is powered by an “ionic wind”, which is a silent flow of ions produced aboard the plane that generates enough thrust to propel the plane in sustained, steady flight.

The plane makes use of the principle of electroaerodynamic thrust.  That principle was first described in the 1920s and refers to a wind or thrust that is produced when a current is passed between a thin and a thick electrode.  If enough voltage is applied, the moving air between the electrodes can produce enough thrust to propel a small aircraft.

The MIT plane is a large, lightweight glider.  It is powered by a stack of lithium-polymer batteries and a specially-designed power supply that converts the batteries’ output to a sufficiently high voltage to propel the plane.  The first test flights were inside a gymnasium at MIT, so the flights did not exactly cover much territory.  But the sustained flight demonstrated the basic principle of ionic wind flight.

There is a long way to go before such technology becomes practical.  It needs to be more efficient, fly far longer, and fly outside.  Outside of drone and other small applications, it is not clear how much ion wind propulsion could influence the future of aircraft propulsion, but it is fascinating to see a plane fly through the air in sustained fashion with no moving parts involved in its propulsion.

‘A Plane With No Moving Parts’ from Earth Wise is a production of WAMC Northeast Public Radio.