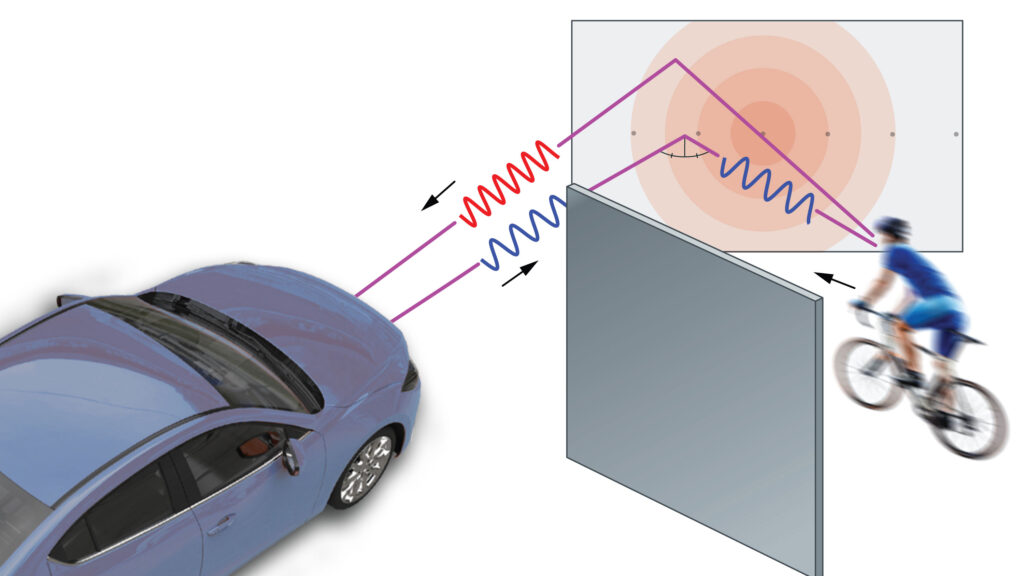 Major automakers as well as dedicated specialized companies are actively developing autonomous vehicle technology.  Many cars already offer varying degrees of self-driving capability.  These vehicles have a variety of sensor systems that allow them to detect other objects on the road.  Many rely on lidar or on cameras using visible or near-infrared light and these sensors do a pretty good job of preventing collisions.   But all of these systems are pretty much limited to detecting objects within a car’s line of sight.  Of course, human drivers have the same limitation.  We can’t see things hidden around corners or blocked by other objects.

Researchers at Princeton University have developed an automated system that will allow cars to peer around corners and spot oncoming traffic and pedestrians.  The system uses Doppler radar to bounce radio waves off of surfaces such as buildings and parked automobiles.  The radar signal hits a surface at an angle and its reflection bounces off much like a cue ball hits the wall of a pool table.  The reflected signal then hits objects hidden around the corner.  Some of that radar signal bounces back to be detected by sensors on the car.  In this way, the system can see objects around the corner and even tell whether they are moving or stationary.

This new technology could easily be integrated into today’s vehicles.  It would enable cars to see objects that current sensor systems cannot record.  For example, it would allow a self-driving vehicle to see around a dangerous intersection.

The system will require further development, refinement, and testing before it can find its way into our vehicles, but it does represent yet another way that self-driving technology may ultimately result in a safer transportation system.