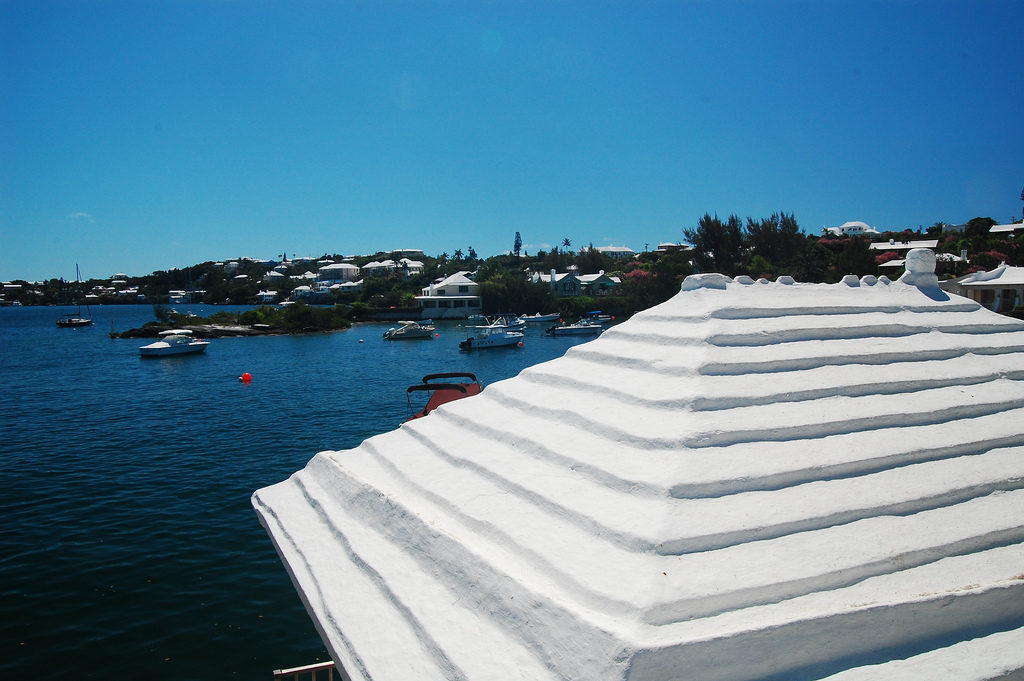 Bermuda is primarily composed of loosely-connected limestone covered by a rather thin layer of soil and the underlying structure is extremely permeable.   As a result, there are no freshwater streams and lakes on the island.  There is very little groundwater at all.  Because of this, ever since Bermuda became continuously occupied in 1609, its residents have gotten most of their water by collecting rain water.

The iconic white roofs of Bermuda are made from native limestone, which can be cut with a saw and which hardens on exposure to the atmosphere.  The roofs are fashioned in step-like sloped surfaces with gutter ridges that funnel water towards pipes leading to underground tanks.   A white cement wash compound provides a sanitary surface on the roof.   Electric pumps lift the water from the storage tanks and the water is stored under pressure for use throughout people’s houses.

All private dwelling and apartment complexes in Bermuda must by law have their own water tanks to collect and store rainfall with their size determined by regulations.  Most homes can store around 14,000 gallons of water per bedroom.  More than 90% of the island’s water supply comes from a combination of rainwater and the limited underground sources.  About half comes from the rooftop systems.

The white roofs also do a good job of reflecting sunlight and keeping buildings cooler under the island’s blazing sunshine.  What looks like a unique and quaint architectural detail turns out to be the basis of one of the world’s most creative systems for providing people with fresh water.

‘Bermuda Roofs’ from Earth Wise is a production of WAMC Northeast Public Radio.