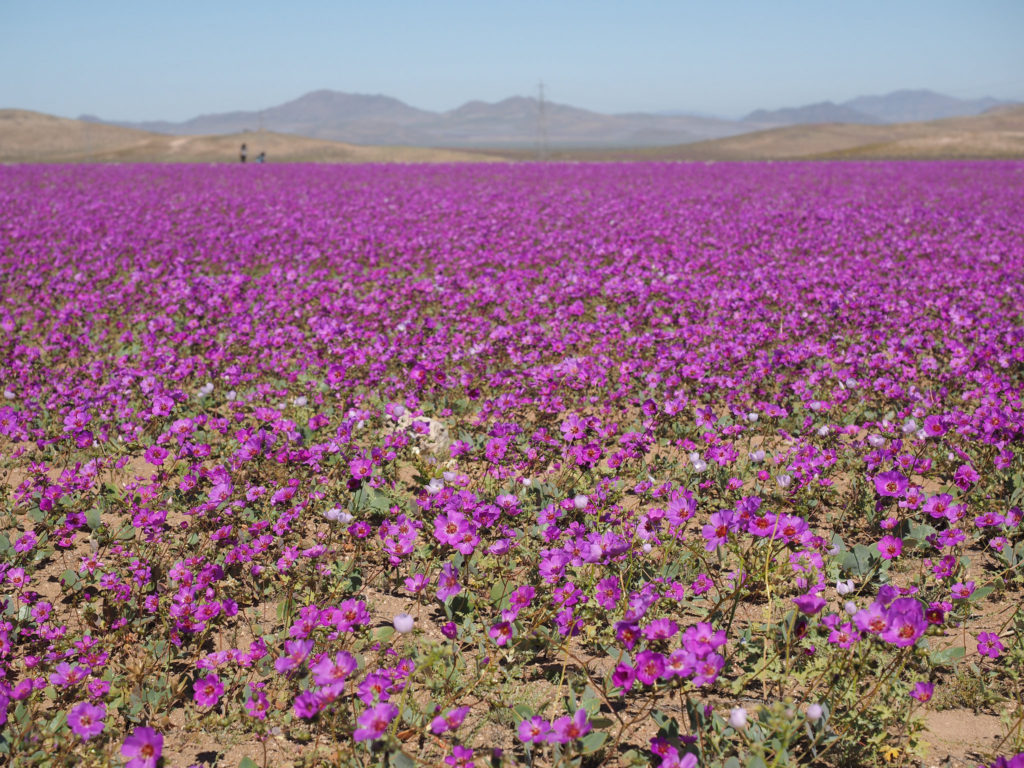 This past August one of the driest regions on Earth transformed from a barren desert to a sea of colorful flowers.  Heavy rains in Chile’s Atacama Desert caused the phenomenon, locally known as the desierto florido or flowering desert.   These things typically only happen every five to seven years, but the previous super bloom actually took place in 2015.

Super blooms occur in deserts that contain a large number of perennial flowers whose seeds, because of the harsh environment, often lie dormant for months or years, alive, but unseen.   It is only when rainwater washes the protective coating from their seeds that they begin to sprout.  In a matter of days, deserts can be transformed.

Deserts in the U.S. also have super blooms.   In March, the Anza-Borego Desert State Park in southeast California experienced one in which the usually bare landscape came alive with vibrant greenery, poppies, primroses, and lilies.  Even California’s Death Valley, one of the hottest places on Earth, from time to time has spectacular super blooms.

For the Atacama desert in Chile, these blooms are particularly rare.  The desert strip extends for nearly 1,000 miles along Chile’s northwestern coast and is so dry that, in some regions, rainfall has never been recorded.   The only plants normally seen are in basins where a little water accumulates.  Most of the Atacama is so dry that few plants, animals, or even bacteria live there.

So, the sight of miles and miles of colorful flowers in that desert is a rare one indeed and, for a short time, turned the Atacama into a major tourist attraction.

‘Super Blooms’ from Earth Wise is a production of WAMC Northeast Public Radio.